Is it really possible to get a new computer for only $35?

I wanted to find out.

You may have seen ads on Facebook for Xtra-PC — “The $35 Computer.” Recently I’ve started seeing them everywhere so I wanted to find out for myself how their products work and if they’re worth the money.

I decided to go for it, so I picked up one of their “Turbo” Xtra-PCs to try with an old, useless Windows XP netbook I had stuck in a drawer several years ago. I had abandoned the netbook because it had become too slow and outdated even for my kids to use… but having spent good money on it I could never bring myself to let it go.

To be fair, as a bit of techie I was fairly skeptical about the product, but for a measly $35 it was worth a shot! (Plus there’s a money back guarantee so I figured there’s nothing to lose.)

So, what is Xtra-PC anyway?

Xtra-PC is a tiny USB device that you plug into an old, tired or dead PC to give it new life. Basically, it’s a custom streamlined operating system that runs completely off of the Xtra-PC USB device, completely bypassing Windows. Since it runs 100% off the USB, it doesn’t interfere with any files on your hard drive and doesn’t uninstall anything. The Xtra-PC operating system even works on PCs with a missing or crashed hard drive, which is a nice feature if your computer will no longer boot to Windows. 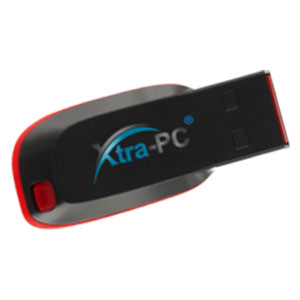 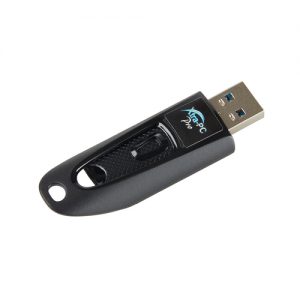 My Xtra-PC Turbo arrived in the mail within two days of ordering it, so that was a nice surprise. Sure enough, opening the package revealed a tiny USB device. (So small that it barely sticks out the side of my Samsung netbook — definitely a big plus since I’ve broken my fair share of protruding USB devices.) It came with simple instructions on how to get my PC to boot from USB instead of the hard drive.

On first boot, Xtra-PC walked me through an easy one-time setup process to get things going. The only obstacle I hit was that I got stuck at a license-acceptance prompt because it took me a minute to figure out that I needed to use the Tab (or Arrow keys) instead of the mouse to highlight the “accept” button. (It was like a quick trip back to the ol’ pre-mouse days of DOS.) That was a bit funky, but everything else was easy-peasy from there. The Xtra-PC OS automatically recognized in installed the correct drivers and software to run my wireless internet adapter, CD-ROM, display, and all other necessities. Initial setup took about 10 mins from start to finish.

If you’re a techie like me, you’ll recognize that Xtra-PC is basically a custom version of the Linux operating system. Linux is known amongst geeks for being rock-solid, considerably faster, and far less vulnerable to viruses than Windows. Running Linux squeezes extra performance out of older processors, which is big part of Xtra-PC’s “secret sauce.”

Well, Yes… Linux is an open source operating system, so you can download various versions of it for free and load it onto a properly-formatted flash drive — BUT — I wouldn’t recommend tackling this sort of thing on your own unless you’re a pretty hard-core, tech-savvy, do-it-yourself-er with free time to burn. If that’s you, I say go for it! The version Xtra-PC has put together is pretty turn-key and will save you from tearing your hair out, plus they offer free technical support. It also comes with a nice suite of open-source apps which saves you from finding, downloading and installing them on your own. I consider my time to be a precious commodity, so for under $50 it’s a no-brainer.

I have to admit I’m definitely impressed with Xtra-PC. After the initial setup, my netbook boots up 29% faster than it does on Windows XP (yes, I whipped out the ol’ timer on my phone — that’s as scientific as I wanted to get). Tasks such as launching apps and surfing the web were all noticeably faster as well. One big thing I noticed is that sites like Facebook and Pinterest open and run great on Xtra-PC (they wouldn’t even load properly on my old version of Windows XP with Internet Explorer).

Xtra-PC also comes pre-loaded with helpful software you can use right out of the gate:

Now don’t get me wrong, I won’t be trading my spankin’-new Windows 10 laptop for my resurrected netbook, but that wasn’t the goal. The idea was to breathe new life into my old PC that was just collecting dust. Now my kids can have their own computer and stop hogging mine. That’s a solid win in my book — especially for only $35.

If you have an old, tired, or dead computer tucked away somewhere, you should check out Xtra-PC for yourself.